Our SevicesTaxation And Compliances
Goods And Service Tax

Non-Resident Indians (NRI’s) are critical to India’s future growth, The NRI’s, on the other hand, poured their hearts out, explaining what they wanted in return from India in clear terms. NRIs are no longer blamed for a loss of intellectual capital in India; instead, their skills and knowledge are greatly sought after here. Former Indian Prime Minister Rajiv Gandhi referred to India as the “Brain Bank of the World," and he took great delight in it. Best NRI Taxation Services in delhi  at Lex N Tax Associates.

What is an NRI’s taxable income?

It’s either you or someone else that has to pay taxes on your pay check in India. NRIs who get their pay in an Indian bank account would be subject to Indian tax rules since they are non-resident Indians (NRIs). The tax rate on this income is determined by your individual tax bracket.

NRIs must pay tax in India on capital gains from shares, mutual funds, term deposits, and property rents if they exceed the basic exemption ceiling, despite the fact that income produced outside of India is not subject to Indian taxation. 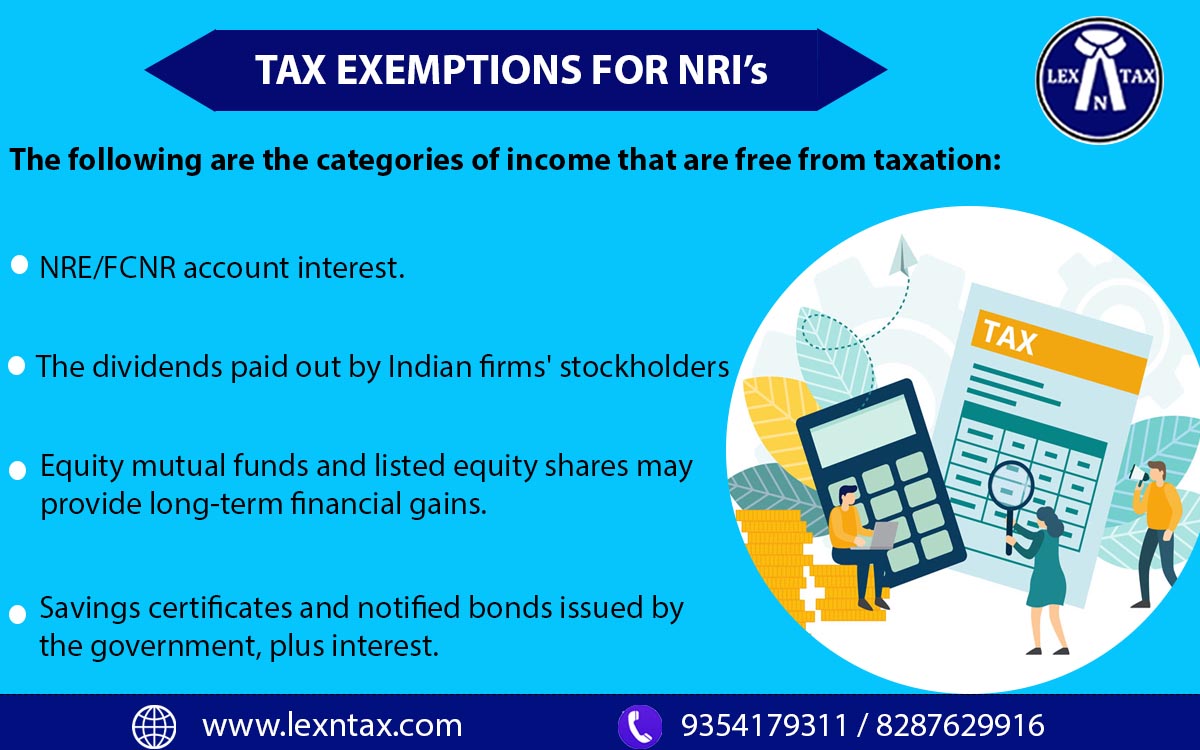 In India, taxation is an essential part of the nation’s economy. The services and goods that Indians buy are subject to a variety of levies. It is the goal of taxes to give customers a better deal on the goods and services they use. Most Indians have heard of several types of taxes, such as income tax, service tax, property tax, and tax deducted at source. On the other hand, non-resident Indians — those who are not citizens of India but have ancestry in the country — must deal with the issue of Indian taxes as well.

If and when they are subject to the Income Tax Act of 1961, non-resident Indians must likewise pay their fair share of taxes.best NRI taxation Services in delhi  is the study of how and what taxes should be levied on non-resident Indians. Aspects of income tax, wealth tax, and real estate tax are all included in Best NRI Taxation Services In delhi . Lex N Tax Associates know for the Best NRI tax filing.

It’s critical that non-resident Indians (NRIs) understand how they become subject to Indian taxation. FEMA (Foreign Exchange Management Act) defines an NRI as a citizen of Indian origin who has spent a certain number of days outside of India and has thereby maintained a relative duration of absence in India.

An NRI’s income generated outside of India is not subject to Indian taxation by default. The basic exemption limit set in the Income Tax Act means that an NRI must submit a tax return I shares, mutual funds, rental property, and term deposits.

Term deposits, stock, and mutual fund interest are taxed at the highest rate because of the taxation of NRIs’ income derived from sources in India. In most cases, this eliminates the necessity for a tax return filing. TDS may surpass an NRI’s basic tax burden, but the other way around is possible. The only method to get a tax refund is to file a tax return, Lex N Tax Associates provides Best NRI Taxation Services in Delhi.

The taxation of Non-Resident Indians (NRIs) in India is significantly different from that of resident Indians. The following are a few things to keep in mind:

If an NRI’s total income includes:

NRIs have the option of choosing whether or not they wish their income to be regarded from investment or capital gains under this exclusion provision. For those who don’t want to pay taxes, all income from sources in India will be taxed. Central Government and Income Tax Department in India reserve the right to amend any of the above regulations,  best NRI taxation services in delhi at Lex N Tax Associates.

The following are the categories of income that are free from taxation:

Sections and circumstances such as the following may exclude capital gains:

According to tax legislation at the time, all of the aforementioned exemptions are available.

NRIs are taxed in a stricter manner than locals. To qualify for a tax deduction, you must use one of the following methods:

An NRI’s taxable income may or may not include income from investments and long-term capital gains, as described above. Taxes are deducted at the point of earning the money. If you have other sources of income than those listed above, you must report them and pay taxes on them in accordance with the laws currently in effect.

TDS on investment and long-term capital gain income may sometimes exceed an individual’s tax burden, although this is not always the case. Filing a tax return is a requirement if you want to get a refund or claim an exemption.

The online site of the Income Tax Department of India is the recommended method of tax return filing for NRI’s. Lex N Tax Associates is known for the Best NRI Taxation services in delhi.